Latest updates from the lab

Highlights of their work from 2022 include:

Action Against Cancer is funding an innovative cancer stem cells research project led by Professor Justin Stebbing and Dr Nina Moderau at Imperial College London. They are developing a combination of new tools and techniques for breast cancer patients, to understand their secondary tumours before they even develop.

One of the major factors that make it so difficult to predict cancer spread, and why some therapies are ineffective, is tumour heterogeneity. This characteristic of a tumour describes its complex composition with many genetic mutations.

The key objective for the first stage of this groundbreaking research was to develop a breast cancer model that addresses the issue of heterogeneity. This has been achieved, and the model is already proving invaluable in furthering research in this challenging area. For example, the team was able to use it to discover which particular cancerous mutations are capable of invasion into the liver and grow there, and which are not. It is anticipated that as this research continues it will prove of immense benefit to patients with various types of cancer.

Developing a new drug - A totally new approach to therapy

The identification of a new cancer causing gene in 2011 by Professor Georgios Giamas was the earliest significant breakthrough supported by Action Against Cancer. This gene called LMTK3 is expressed more in cancer cells than in normal cells. Those cancers that have high levels of LMTK3 are also much more aggressive.

Since 2011 we have funded research aiming to develop anti-LMTK3 drugs. The team is now working on optimising these and testing them in various models. They have established and validated different types of models for various experiments and investigative procedures. These will be used to examine and clarify the mechanism of action of these novel drug compounds. In addition, how specifically and effectively the compounds work to reduce tumour growth will be tested. This work is crucial before progressing to the next pre-clinical and clinical stages, where the aim is to test the best of these drugs in patients.

A team supported by Action Against Cancer is researching immunotherapy for gastric cancer patients, who are mostly diagnosed at an advanced stage once the disease has spread (metastasized). This means that curative surgery is not an option, and survival is limited.

Gastric cancer is one of the most common malignant tumours worldwide, with the fifth and third highest morbidity and mortality, respectively, of all cancers. Chemotherapy has only modestly improved patients’ outcomes and is mainly given with a palliative intent. Immunotherapy has improved overall survival of patients with gastric cancer, and has thus become a new standard of care in clinic. The team’s work was published recently in a scientific journal, linked here.

A team led by Dr Leandro Castellano (shown right) at the University of Sussex has made some important advances in research into the role of long non-coding RNAs in breast cancer. Despite recent advances in targeted treatments breast cancer remains a significant threat to women’s health.

The majority of DNA is transcribed into non-coding RNAs, some of which play important roles in normal biological function, gene regulation and cancer development. The findings from the team have been published in the journal Cancer Gene Therapy, linked here.

Another team funded by Action Against Cancer at the University of Sussex is researching differentiation therapy. They have made an important breakthrough this year, discovering that a drug that “switches off” cancerous cells and slows their growth could give hope to patients with aggressive brain tumours.

By stalling the disease’s progression, the inhibitor, which targets a particular protein, could buy time for other treatments to become effective. Their findings were published in the journal Oncogene, linked here.

Professor Georgios Giamas, who is leading the work, said: By slowing or limiting the growth of tumour cells, we essentially make glioblastoma an easier target for more conventional strategies.”

Some previous achievements in the lab: 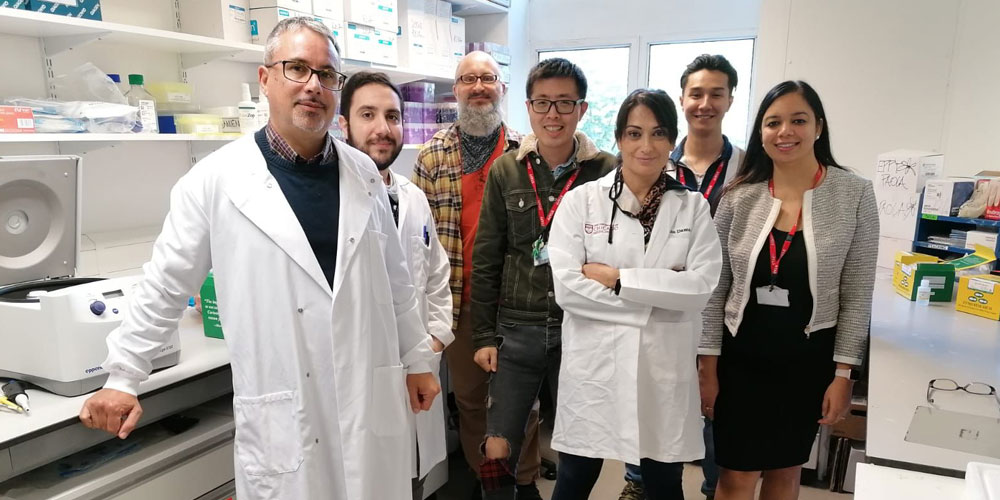 Back to 'Our Work' main menu